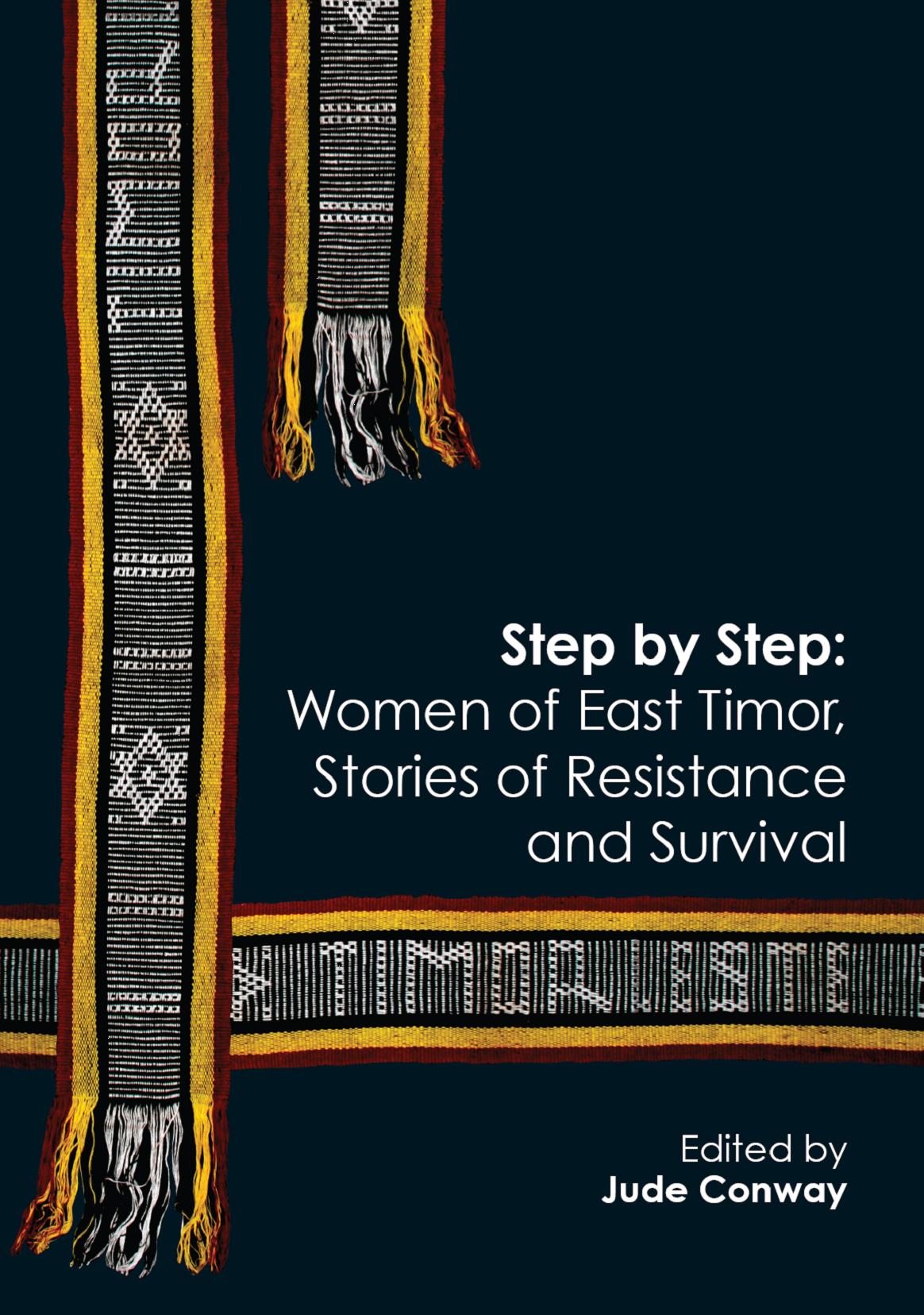 Women are almost always invisible in the telling of East Timorese history. Most of the writing on East Timor is focused on male leaders and guerrilla-fighters. However over recent years in a campaign to recognise the actions of women during the independence struggle, a series of texts have been published by Timorese women and their international supporters. This book can be counted among them. It is an act of political solidarity by editor Jude Conway, and this is its great strength.

Step by Step: Women of East Timor, Stories of Resistance and Survival was launched around Australia and in Timor in 2010. It presents 13 oral histories from women well-known in Timor for their roles in that country’s independence struggle: on the guerilla front, in the diplomatic arena and within the student movement, both in Timor-Leste and beyond. Each story is accompanied by several pages of photos of these women, many taken by Conway who was part of their struggle for an independent Timor-Leste for over twenty years. The photographs amplify the stories, showing, somewhat disconcertingly, how love, marriage, birth, friendship and personal achievement continued during the Indonesian military occupation of Timor.

The two opening stories illuminate the importance of women for the survival of the guerilla movement inside Timor and segue into the stories about the work Timorese women did all over the world. Ceu Lopes Federer’s story provides a lens through which to read the subsequent twelve chapters. Ceu’s story illustrates how important women were within the solidarity movement, working both inside and outside East Timor. Ceu and her compatriots raised money for the resistance and provided it with accurate information about external events, as well as supporting the movement’s crucial diplomatic efforts.

These accounts also provide a context for the sometimes small but extremely risky activities of other storytellers when they speak of secreting letters, notes, medicines or food inside clothing and bluffing their way through Indonesian checkpoints inside East Timor and Indonesia. The most heart-wrenching story is of a child who wished her mother, Dulce Vitor, dead because the military were pursuing her, forcing her children to go hungry and become fugitives. Mica Barreto Soares’ story tells how Timorese students carried out their work for the resistance inside Indonesia, facing such risks on a daily basis.

The various reasons why these women became involved in the struggle for East Timor’s independence gives an insight into why these stories are critically different from other oral histories about women’s involvement in war. Most of them became caught up in the struggle because of their first-hand experiences of oppression and violence and also those of their family and compatriots. As contributor Carolina do Rosario says, ‘As Timor women we felt worthless, little more than dolls. We felt that slaves had a history we shared… that’s why…. we never walked away from the struggle, we kept fighting.’

This collection of stories illustrates the everyday embodiment of a conflict within families. It was on the fertile ground of dire need and ambition – in amongst the secrets, on the boundaries of family relationships, political and institutional alliances – that the seeds of fear and distrust could be sewn by enemies or serendipitously fall, tempting betrayal or resulting in discovery. However, at the same time these similar fissures and trusted spaces deeply embedded in private life were the very thing that activated impulses of resistance. These women’s stories illustrate that it was within homes and families that courage, adaptability, resistance and resilience grew and spread through the generations from the clandestine movement inside the country and to the international solidarity movement.

The stories make it clear that war was everywhere and that every aspect of personal life was affected by it. The simple device of providing an introductory paragraph about family and ethnicity for each chapter aids understanding of the intricate and personal character of conflict. However, these all too brief introductions also suggest the potential for a broader writing of how women and families live with and survive war. The women’s narratives relate distinct family histories showing how the arbitrariness of events shaped their destiny. The book would have benefited from more explanation of the wider historical context and a commentary that explained the connections between the women in each chapter. At the same time, if these stories had never been published in this format, they would not serve the same function politically or be as satisfying for the storytellers and their families and colleagues. These stories have great value as narratives; but they also cry out to be at the heart of another book about women’s role in East Timor’s great struggle.

The power of these oral histories resides in the immediacy and realism of their first person narratives, published as they are while the protagonists are still alive. It is also significant these stories have been published for a broader English-speaking readership. This ‘personal as political’ approach to the historical record of an international political conflict adds weight to the struggle for gender equality in East Timor, which remains largely a conservative male-dominated society. These women make it clear that the fight for equality was not introduced by foreigners but has grown from within their own struggle for independence.

Like other issues of profound importance to women the task of documenting women’s part in Timorese history has fallen to a few overworked and under-resourced women in local groups and international allies like Conway. Due to the efforts of such a few, recognition of women’s role is slowly growing, but much more work is still needed. Conway’s Step by Step has made a significant contribution in documenting this aspect of Timor’s history.

Jen Hughes is a writer and filmmaker. Her work includes The Circle of Stones (2001); Time to go John and Black Bullion (2003). She is also producer and co–author of http://www.suaimediaspace.org/.

Sara Niner (http://saraniner.blogspot.com) is a researcher with the School of Political and Social Inquiry at Monash University. Her books include To Resist is to Win: the Autobiography of Xanana Gusmão with selected letters and speeches (Melbourne, Aurora Books, 2000) and Xanana: Leader of the Struggle for Independent Timor-Leste (Melbourne, Australian Scholarly Publishing, 2009).